A little bit of news….

I got a little frustrated and annoyed today. We were bringing a boat in and as it’s motor had broken, they had to paddle for over an hour and a half before they made land. The people on the shore were trying to get them to aim for a piece of safe beach away from the rocks but it meant fighting against the tide and simply added to their exhaustion. The idea was a good one but equally the people who thought it was just making it harder and more distressing for them were also correct as it did just that. There seemed to be no uniformed idea of the best approach to take and it made me realise how many people are volunteers and not trained professionals. Don’t get me wrong, some of the people out here know exactly what they are doing and are doing a great job, and there are a few professional groups but generally an international humanitarian disaster is being run by volunteers with no training and who are gaining the experience on the job. This is people lives and they’re been saved by people learning on the job. Let that sink in. This is in no way taking anything away from people doing an incredible job, but it should never be like this. Where are the European governments best men? Why is the UNHCR viewed of as a complete joke over here? Even send in the army, I’m sure they would prefer that to sitting around in their barracks. This is peoples lives and I’m stuck wondering when the world with all its money and power is going to come along and save them. It is a disgrace, it disgusts me and I’m angry about it. Makes me wonder whether they really want to efficiently deal with this crisis and how much they actually want and need it. It can’t be denied that it’s not only a money maker but creates a really emotive and manipulatable political argument too.

But enough of that, I want to mention a few other things I haven’t been able to over the last few days. It has been a week and I’ve moved on from my pointless sentimentality that I first experienced to something else and I fully expect to move on and then probably back to sentimentality all over again. I’m not going to make a sweeping general statement and say that these are good people, but there are good honest innocent men, women and children risking everything for an idea they have been sold about an illusionary Europe. I met a Syrian guy, fresh off the boat in the north of the island, a couple of nights ago and he stayed with me for a bit while I played crowd control. I think we both needed each others company a little in that moment, then the next night when handing out water and clothes at the port I saw him again and I was so happy he was there. He introduced me to all his friends and we chatted for a while about their lives back home in Syria. He was a mechanic, one of his friends a civil engineer, another a veterinarian, another an accountant, and they were all in their mid to late twenties, some still studying. This is Syria’s next educated generation which should be taking the country forward but instead they are fleeing for their lives so they can clean toilets in northern Europe. Despite having the money to travel to that far, five to six thousand euro by the way, and for many is money sent to them by people already settled in Europe, they ‘have no future’ at home, or in many cases no home at all. On a macro scale, the future impact for Syria of losing some of it’s best minds must never be underestimated and will simply weaken a country already on it’s knees as foreign powers point rifles at it’s head from all angles. It just seems like these people are pawns in a game of chess, although it’s not just being played in one country but the entire Middle East.

There are so many little bits of information or ideas floating around here amongst those helping out. The refugees pay between one to two thousand euro each for the crossing. A boat arrived in the north just a few hours before we arrived which had nearly three hundred people on it. Normal dingies take about forty and some of the larger boats seventy. The Turkish jails are apparently full of smugglers as it is only six months for a first time offense, two years for a second, time well spent if you can set yourself up for life on the profits of just one trip. These smugglers are apparently Turkish mafia, although the levels of corruption in Turkey makes Erdogan and his government just as responsible. There are countless reports out here of refugees being forced onto the boats at gunpoint if they refuse to travel because of the weather or the condition of the boat. As the smugglers don’t get paid until the boat arrives this is highly believable and as the weather gets worse going into winter is only going to get worse.

I seemingly couldn’t help myself, I tried to be positive and tell wonderful happy stories but I slipped back into the reality of the situation. I will finish with a positive though. About ten days ago, a woman’s water broke and she went into labour either when getting into the boat or while crossing the six kilometre stretch from Turkey. A volunteer successfully helped her give birth on the beach. I find that incredible, so beautiful in many ways, and something I suspect will never be forgotten by all those involved. What a way to come into this world

Today has been less manic, or at least I have become a little more used to it already. You don’t have time to think, if possible to be too sentimental, you just have to get on with it. We went up to Moria, the registration centre for refugees coming from non-Syrian countries, those who it’s not in the benefit of the west for their media to drum up sympathy and support for. Dealing mainly with Iraqis and Afghans, we handed out clothes, shoes and food to whoever was lucky enough, which is never nearly everyone.

Moria used to be the registration centre solely for the Syrian refugees but then when everyone else turned up they moved them somewhere else. Moria is like a festival gone wrong, rubbish everywhere, high unscalable fences, locals selling expensive crap food and angry police playing ‘crowd control’. It is a nightmare, especially for those trapped behind the fence, lucky enough to be in an indefinite queue and unable to leave to get any food, drink, or even go to the toilet. While listening to two doctors talk I discovered those processing the people control the speed they let them through, it is increasing obvious the benefit to the local economy of having thousands to hungry people needing food, taxis and boats arriving daily. Incidentally, they were also discussing the fact the person they were checking up on most likely had hypothermia.

I showed them a photo of a man suffering from trench foot, I have added the picture below, it is nothing out of the ordinary around here apparently. I have been too busy to take many photographs and people don’t always like their picture being taken. Take a look at what I have so far, it may give you an idea in a way that words cannot. 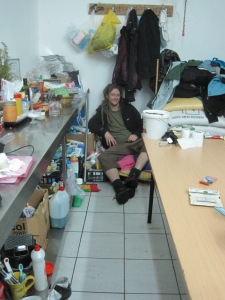 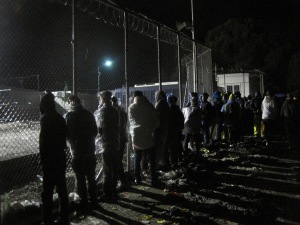 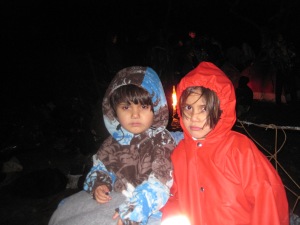 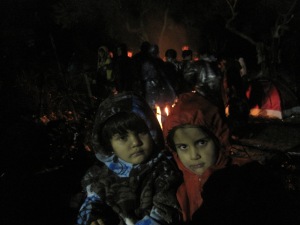 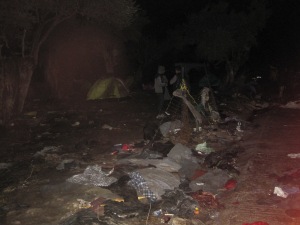 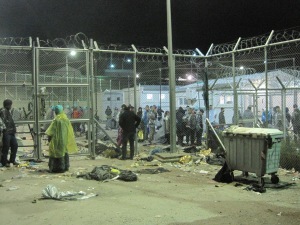 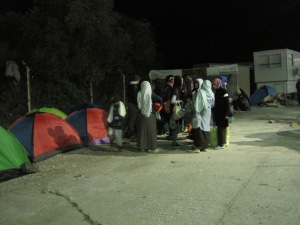 This is not the first draft of the first sentence. Trying to find the words to describe a situation only relatable to most peoples idea of hell and knowing those words will never give justice to what is going on in Lesbos, that pretty little Greek island chosen by so many as a landing point in Europe. I am inclined to talk about how hard today has been for myself, my first day helping refugees fleeing the Middle East, but whenever I start to feel sorry for myself I remember how I can’t even comprehend what those poor people are going through.

We arrived in what is a near constant storm, soaked by rain and lit up by lightening, not the warm sunburnt island I was expecting. When we finally found the camp we were thrown into insanity, a ‘boat’ landing on the beach beside the camp, IN THIS WEATHER?!! I couldn’t imagine anyone would dare, brave naïve or desperate, to cross a body of water which in calm weather sinks boats. And of course it wasn’t going to be the only one.

I actually don’t know if I can finish this coherently, expressing how I felt being around such desperate people and not being able to give them everything they possibly needed. How to explain to people when you don’t have the language that they can only take one meal and that no you haven’t got any more dry clothes with you. A woman miscarried upon arrival. Malnourished babies too exhausted to cry. Is this the world we have created; people fleeing war waged in our name and drought brought on by our destructive overconsumption.

There are more camps, we are yet to see them but this I think is the biggest as it’s nearest the port, which itself is turmoil. Only vulnerable families and those who really need help, a man with a gunshot wound and another with gangrene for example, can stay here. The rest get dry clothes and sent on with the food to Moria, where they have to register and apparently sleep outside in the rain, or in a river as it was described, while the police let in the odd small group at a time when they feel like it to register and deny everybody access to the six hundred dry beds inside.

I planned on taking photos to accompany this but there wasn’t a moment to even think about it; yet I don’t expect every day to be quite as manic so I may be able to put a few up at some point. We walked home in the rain, soaked by the time we returned. Our night ended the same way everyone else’s started. But then we had a shower and got dry while they just got wet again and this time stayed wet. It’s going to be a cold night. These people need help. They have a long journey ahead and it isn’t going to get any easier.